Emerging as a global power after WWII, the United States felt committed to contain the spread of communism. During the late 1940s and 1950s, the country experienced a paranoia about communism spreading and thousands of Americans were accused of affiliation with the communist party. By 1950, the United States was involved in the Korean War and by 1955 the unpopular Vietnam War, which consequently fueled a strong antiwar movement. 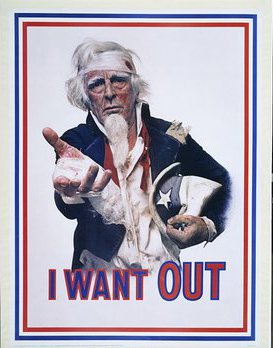 I Want Out, c 1971
Committee to Help Unsell the War
(Library of Congress)